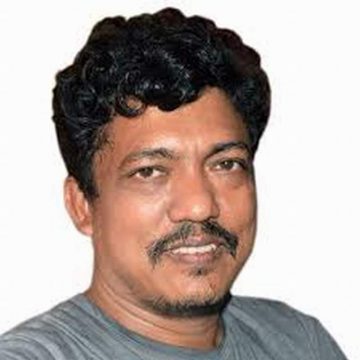 Sana Ullah Sanu: The coastal area of Bangladesh and the people living here are gradually being affected by climate changing. Fighting with hazardous environment is an everyday affair. Sometimes cyclone destroys them while sometimes flood washes away. Disaster snatched away thousands of people’s lives. Fear and panic prevails everywhere. River erosion causes engulfment of villages after villages and affects the poor villagers. Earning livelihood becomes harder day after day. Various development programs do not reach here. Different kinds of government and non-government services remain out of hand for general people. Necessary infrastructure is not build up here also. But still the scenario fails to draw media attention or coverage. Media only feels interest to visit here after a natural disaster though life in normal time is not also normal. In the circumstances, it is high time to let the outer world know about them.

Rafiqul Islam Montu has deliberately taken the responsibility. He makes his mission to pick up news from core rural areas. Sometimes he crosses stormy river by taking life risk, sometimes he walks miles after miles just to be beside the affected people. He does not care to go with fishing trawlers into deep sea or stay in an unknown house or in an NGO dormitory. News is the only thing that he needs. Staying with the people he collects news and publishes in the media. He also helps other local reporters and papers with news and news related photographs. He involves school going children in his mission. And thus he is making his attempts to remove the darkness from coastal area. People come to know about the Right to Information Act and benefits have already started to come.

Rafiqul Islam Montu has received Dhaka Reporters Unity Award the third time for coastal issue based news.This award is highly respected for professional journalists of capital Dhaka. He also received about two dozen national and international awards for writing coastal news. For the work of coastal He has given a recognition named `Upakul Bhondhu’ (coastal friend).

Md Faruk, Fisherman, Kamalnagar, Laxmipur, said,“No journalist visited our area before. Now through Rafiqvai we got a lot of news of us in newspaper. We can tell the government our news and that helps us a lot,’’ told

Md Nurul Amin, District information officer, Bhola, said, “People are getting conscious as the media focuses on their problems and thus the neglected people get benefitted. These are in the Right to Information Act. In the act, people have the right to know information to fulfill their expectation. Making the coastal people conscious is also under the law. Every office is ready to help the people. The information flow also helps us,’’

To collect news Rafiqul Islam runs almost 710 km of coastal area of Bangladesh regularly. He runs from Teknaf to Sundarban, from eastern part to southern part. These areas are very often visited by natural disaster like flood. Erosion makes people to lose their home. Strong current washes away their houses and structures. For lack of communication and backwardness, this news remains unpublished. Only cyclone makes the media to look at coast when it tries to have a good coverage. They do not know how abnormal life is at normal time at this area. They do not make any news on coastal area issue. For these reasons, the step of increasing data flow in this area becomes necessary. And this is the first step in Bangladesh in making a detail report on coastal area.

Choton Shaha, District Correspondent, Desh TV and Banglanews24.com, Bhola, said, “Rafiqul Islam Montu bhai is working on the coastal area of Bangladesh. His works are really praiseworthy. The picture he drawn from the endangered people also helps us. We also find news sources from here. It helps us to make news and we send them to media. His reporting style is undoubtedly unique. It increases our working area further more.’’

Sajjadur Rahaman, Staff Correspondent, Banglanews24.com, Laxmipur, said, ‘’Rafiqul Islam Montu is a friend of coastal people. By wondering in coastal streets he focuses on the people’s problems and possibilities. This is called real journalism. This helps the coastal people as well as journalists working in this area. His reporting process becomes an example for other journalist, specially in finding reporting issue.’’

If the data flow continues, some other positive effects may be seen at long term. Some expecting results are: 1) A strong communication network may be established in coastal area; 2) National and local newspapers may get encouragement to publish coastal news regularly; 3) Coastal issues may affect national policy and strategy; 4) Development will be faster; 5) Organization like “Coastal development authority” will be established. Introducing ideas to local readers, Mr. Rafiq encourages them to write. They themselves make reports, edit those and publish wall magazine “Belavumi”.

Adil HossainTopu, District Correspondent, Channel 24, Bhola, said, “Rafiqul Islam bhai works on coastal issue. As a journalist, I am benefitted by his works a lot. While working, we do not notice many issues. Rafiqbhai finds out those issues. Then TV and newspaper media get the opportunity to work on those. Rafiqbhai’sattempt of working on coast also inspires and refreshes us. We got new ideas from him.’’

Abul Kalam Azad, Editor, Daily Meghnar Par, Laxmipur, said, “As far I know, this is the first among this genre of journalism. We cannot reach many remote area of coast. This exceptional journalism helps us to publish local newspaper. We got a lot of new information from remote people and that news fulfills the readers’demand.’’

Moni Akter, Children Journalist, Student, Barguna, said, “Published wall magazine for the first time in my life. Before this I had no idea of writing a news. But before publishing the wall magazine, we were given ideas about making news and it opened my eyes. I came to know about news, learnt writing system. Now we, with our friends, write regularly and publish wall magazine. Writing habit also influences my thinking ways.’’

Junayed Al Habib, Children Journalist, Student, Laxmipur Govt. College, Laxmipur, said, “I am a school student. I have learnt how to write news. Coastal-friend journalist Rafiqul Islam Montu has taught me to write; given me ideas to write. He informed us about the problems of coastal area. I with my friends find out coastal problems and write them in our wall magazine ‘Belabhumi.’’

Journalist Rafiqul Islam realizes the problem behind the backwardness of the coastal people. His main target was bringing the problems of coastal people into light to show those to national media, state’s decision making authority, government and non-government offices and others and to solve those. Mr. Rafiq realizes that the vast assets and huge possibility of coastal area should be measured properly and nationally. And that can be possible only by confirming data flow. He just tries to connect the coastal with the central by his exceptional work.

This reporter has been trying to circulate coastal area news to the center from almost twenty years. He makes several analytical reports on several coastal issues, researches and encourages other reports to report on coastal issues. He identifies peoples’ problem staying with them and reports those. Sometimes, instead of reporting, he himself tries to find solution by contacting with authorities.

Journalist from local and national dailies is associated with this kind of work done by reporter Rafiq. Government administrative officials, field officer of NGO, representative of civil society, teacher, student, youth, peasant, fishermen, day laborer and citizen from various professions also involve themselves. Local journalists get training indirectly on social, environment and developmental issues of coastal areas by performing the task. Student and youth are gathering to solve local problems. They act as sources of local journalists on coastal issues.

Local government is taking initiatives to solve the problem as report is generated from root level. They gather new information through arranging meeting with farmers, fishermen, day laborers and common people regarding the subjects. As a result, those people become aware of their rights. Journalist Rafiq’sexceptional reporting has been playing a positive effect in solving social problems. A large powerful network has been introduced among journalists and coastal peoples throughout the country by the work of him. At the same moment this dissident journalism has created bondage between policy makers and coastal peoples.

A N M Ashraf Uddin, Chairman, ChorFolkon Union Parishod, Kamalnagar, Laxmipur, said, “Information is needed to develop the remote area and to solve remote people’s problem. Those problems which are published much meet their solution early. Rafiqul Islam, the presenter of the development of coastal Bangladesh, has taken to publish remote area’s news as a challenge. This investigative step plays a helping role to the local public representatives.’’

Journalist Rafiq keeps regular contact with this network that has created based on different reporting. It has become a regular field of exchanging information. A fishermen or peasant from one part to another part of the coast passes information to journalist Rafiq. Even those fishermen and farmers augur local problems and want to know how it can be solved. Rafiqul Islam leads them to the right path. At local levels journalists seek Rafiqul Islam’s suggestion on different issues to report their dailies. They are given advice on how to start a report, what shall cover the report and source of information regarding the report etc.

Journalist Rafiqul Islam believes that this type of exchanging information can help coastal development. He thinks that this information based on underdeveloped region can affect policy making level. For that he makes people oriented reports amidst people which are unprecedented. Officials from GO and NGO and representatives from donor countries shall undertake efforts to solve the problem.

SanahUllahSanu, Editor, Laxmipur24.com, Laxmipur, said, “This may be called community journalism. Rafiqul Islam Montuia working at field level of coastal area of Bangladesh. This out of box journalism is introduced for the first time not only in Bangladesh but also in the world. This helps the coastal people as well as journalists. Establishment of coastal database is another important outcome of this attempt which will enlighten generation after generation.’’

Of his own exceptional journalistic ethics Rafiqul Islam Montu said, “the government has a good number of policy regarding underprivileged coastal region as well as multi-level development projects. A section of budget goes to coastal region but there have no fruitful effort to implement policy as well as monitoring the development project. For example, fund is allocated for setting up school but nobody is to monitor whether school is constructed properly or not. A school may be built after several appeals but no one is to monitor the condition of education in the school. After long standing demand from local body community clinic has been set up in remote areas but no one is to monitor the arrangement of clinical facilities at all. As a result, the credit of development does not go to the coastal region. For that reason, it is very urgent to speed up the data flow for enlighten coastal darkness.”

Rafiqul Islam Montu, Coastal-inventor journalist, Bangladesh, said, “I call it a different Bangladesh. Life is totally different here. NGO activities are rarely found and if found have not implemented properly.  People living here are still neglected after a long period of independence. In every sector like communication, education, health they lag behind. From this negligence I got inspiration to work for them. It needs to work both the government and NGO to implement development activities. And to make perfect development plans information will be needed. This data flow is playing an important rolewith necessary information.’’